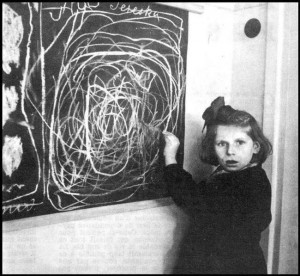 After being asked to do so, this girl has drawn a picture of Home.

Is the truth of her home in the lines on the board, or in her expression and the oceanic depth of her eyes, or both? In the photograph she’s a child, of course, yet hers are the face and eyes of someone infinitely older. We’ve seen similar faces, similar eyes in photos of children in Berlin’s bombed out streets, in Vietnam, in Darfur, in India, in the Great Depression, in Buchenwald.

How does a child get such a face, such eyes? She’s been emotionally brutalized, perhaps physically tortured, yet she is still alive, and her survival looks like this. She’s crossed over, stepping purposely from the depths of one reality to another and back again, and she is forever changed by the journey. But who is responsible? Only everyone—you, me, make your own list, and every name you record will also be on her list. We are all behind her; we’ve all, in some ways great or small, made her.

I hear someone fretting, “Too much; too harsh!” Really? Ask the child. I’m afraid there is no wriggling free of this inconvenient hook for anyone, not for a single, living human being. For as long as one child looks like this, and draws Home like this, we must hold ourselves accountable.

To begin, measure yourself against no one but you. Ask yourself, what do you feel? What can you do? And then, what will you do? Will you traverse the canyon between the compassionate thought and action?
How will you do it?

A man I know left everything to assist refugees in Istanbul. He gave up his therapy practice, his club memberships, his beloved vintage car; he even found a home for his two cats and his dog. How long will you be gone? I asked. I don’t know, he answered. He said it cheerily, and he laughed, at the prosaic nature of my question, perhaps, or the absurdity of his plan; perhaps out of relief that he had figured out a way to alleviate the suffering of others, and that once he had made up his mind, everything seemed so simple.

I looked again at the girl’s drawing. The longer I looked at it, the less crazy it seemed. I thought, doesn’t a lot of daily life really look like that? If it does, of course, mostly we look away. Only if someone were to pin us to the task of drawing on a chalkboard the look of a day might we produce a drawing closely resembling the girl’s drawing of Home. I accept this as a revelation about reality; the scratchy reality underneath the artificial realities we clumsily construct to shield ourselves and get us through the days, the nights.

Learning this much is a small step, but it moves me one step closer to drawing a very different kind of home; and if I can learn to erase some of the crazy-quilt, cross-connecting that wants to fill the drawing surface, then anyone is capable of doing it. And so we inch closer towards a more peaceful, harmonious and spare representation of Home and the true place, the reality beneath fear’s surface, that always rewards the increasingly selfless, emboldened seeker.

I want to be that, and I believe you do, too. Let me surprise you; you surprise me. Let’s see what each of us can do to create a different truth of home for every child, and for every child still scratching for fulfillment in a grown-up’s body. Person by person, act by act, we can Rosie the Riveter this process. Let’s begin. Let’s keep moving and never give up despite voices insisting that what you do just doesn’t matter. Like me, I suspect the main voice like this you hear is inside you. Quiet that, and you’re free.

A woman and man stand alone in the street

The street is empty.
No human or animal appears.
Even the birds are absent.

They say to each other what
Are we doing here? Where
Is everybody? Lawn sprinklers erupt.

Automatic, the woman says,
Like most of our thoughts—actions
Without meaning, actions while asleep.

And consequences, the man murmurs.
Oh yes, she agrees, always results.
So, what will we do now? The man asks.

Walk, I guess, the woman says.
They slow down at the edge of town,
Listening to the ruckus over the hill.

What do you think? Machinery?
No, she says, it’s people, a lot
Of people. Hear it now?

Sounds like marching. Sounds like weeping,
Yelling, singing. Let’s go, she says. Why?
Because we’re needed. Because we have to.

I am accepting new clients for long-distance mentoring on writing/reading projects, poetry or prose, or both. If you’re interested, email me at poetrymentor@mac.com